In ancient civilisations birds of prey play a special role as attribute, symbol or personification of the highest gods and rulers . This was also the case in in Ancient Greece and Rome. For example, the eagle is closely associated with the almighty Zeus/Jupiter.

Homer’s epics mention birds of prey in connection with important events of war. At key moments an eagle or hawk may appear in the sky as a sign from the gods.

The subject of a bird of prey locked in battle with a snake was already common in Oriental art. In Greece the flying bird of prey, with or without a snake, could be seen on shields as early as the 7th Century B.C. In early Greek paintings the bird of prey often appears accompanying warriors on horseback.

The eagle also plays an important role in the depiction of the Prometheus myth . Archaic vase painting portrays two characteristic moments from the myth. In Sparta the focus is on the punishment of Prometheus: in Laconian vase paintings the eagle swoops on the tragic hero with the aim of tearing apart the victim’s body. In Attica, however, this brutal scene isn’t depicted: here the emphasis is on the rescue of Prometheus by Heracles, who kills the eagle with his arrow.

In Greek vase painting birds of prey appear from the late 8th Century B.C. and by the 7th and 6th Centuries B.C. come to represent an essential element in iconography . They can be found in all relevant vase categories of the Archaic Period, but above all on Corinthian, Laconian and Attican black-figure vases. They can also be found on sheet bronze, coins and terracotta tiles.

 In ancient Oriental and Egyptian cultures conventions of representation are established which remain in place over a long period of time and even in the Greek art of the 5th Century B.C. show only mild variations. 

Birds of prey can be seen in Mesopotamian and Egyptian art as early as the 4th Millennium B.C. Birds with wings spread above their backs (fig. 1) and birds whose rear wing (here the left wing) exposes the breast (fig. 2) predominate in Neo-Assyrian relief sculpture.


Birds flying on their side with wings spread perpendicular to the body (fig. 3) or with raised wings that appear layered to the observer (fig. 4) are clearly Egyptian creations. It is primarily songbirds and aquatic birds that are depicted in this way.


In Egypt birds of prey such as hawks and vultures are usually depicted with their wings lowered. This unnatural positioning of the wings characterises exclusively divine birds such as Horus and Nekhbet. The austere stylisation and the emblematic character underline their important role in Egyptian religion.

Standing birds in profile can be found early in almost all cultural circles (fig. 5).


From the 4th to the 1st Millennium B.C. heraldic representation dominates the Orient:
a frontwards facing body with symmetrically spread wings and the head turned to the side (fig. 6).


The heraldic eagle plays a significant role during the Hittite Empire period ("Großreichszeit" 1450 - 1200 B.C.). Double-headed eagles often appear, though their significance has yet to be established with certainty.

 Not until the Scythians in the 5th Century B.C. does the heraldic eagle regain its place of honour. The characteristic body parts (head, tail, wings and claws) are represented in such a way that they can all be taken in at a signal glance. Each body part is clearly distinguished by contour lines.

Birds flying on their side with wings curved at the wrist are very rare in Oriental art. When they do occur, the heraldic type mentioned above (fig. 6) undergoes a 90 degree turn. The legs lie either symmetrically at the sides of the body or are absent entirely (fig. 7).


In Greek art of the second half of the 8th Century B.C. a formula for flying birds of prey evolves which will be retained throughout the Archaic period (fig. 8). Its chief characteristics are the bird’s head in profile and fully spread wings which curve at a right angle at the wrist.


The influence of Oriental predecessors (see fig. 7) is clear. However, the horizontal positioning of the head and the form of the wings, curved forward as if in a swooping motion, lend this depiction a dynamism that is missing from the Oriental examples. The gliding movement of flight is brought out more powerfully.

One of the earliest examples of this type can be found on a Protocorinthian aryballos from the early Oriental period (cf. H. Payne, Protokorinthische Vasenmalerei, 1933, plate 6,1; the late 8th or first half of the 7th Century B.C.). It’s unclear whether the wings of the bird of prey, painted in black silhouette, are being seen from above or below. The same goes for the tail, whose contours appear in the form of a palmette. The claw underneath the body allows the belly to appear as if in profile (fig. 9). Clearly this isn’t a concrete image derived from nature, rather the depiction brings together several perspectives of the flying bird.


From the second quarter of the 7th Century B.C. the bird’s feathers are depicted by scratching. Pioneering in this respect are the bird of prey’s feathers on a Protocorinthian aryballos (Payne, ibid., plate 20,1). The wing feathers are indicated by horizontal scratches and are distinguished from the shoulder section by two vertical lines. In the same way the tail, in the form of a palmette, is divided from the body by two parallel lines. The claw isn’t visible on the shield (fig. 10). 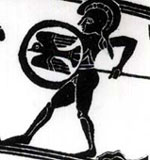 
This style of representation is maintained in late Proto-Corinthian vase painting. Additional details such as the beak with two distinct parts and a dividing line between body and head also appear. To an increasing degree scratching and the application of colour are used to depict eye sockets (the orbitals), nostrils and claws, as well as wing and tail feathers. The lower body contour is always continuous and unobstructed, while as a rule the upper is intersected by the wing. As a result the upper wing seems to emerge organically from the torso. It appears to be closer to the observer. The lower wing seems to be further away. In this way an oblique view from below is suggested.

The Corinthian type of flying bird becomes more widespread throughout Greece during the 7th Century B.C. In Athens it reaches its artistic high point in the monumental eagles of the Nessos Painter. In the so-called Nessos Amphora the bird of prey swoops steeply downwards (Fig. 11; S. Papaspyridi-Karouzou, Aggeia tou Anagyrountos, 1963, plate 88). A raised claw is visible. The eagle’s head consists of individual ornamental forms which are combined. Two concentric circles form the eye. The ear consists of a small volute. The principle of changing perspective is also clear in the details. The observer has the impression of seeing the bird from below. At the same time, in the central zone of the wings covert feathers are depicted, though these should only be visible from above. It wasn’t the painter’s intention to present as realistic a copy of nature as possible, but rather to unite what seemed to be essential characteristics of the flying bird of prey in a single depiction .


In some variations of this type the wings are joined together on the bird’s body. A lekanis dating from the early 6th Century B.C. shows a large flying eagle holding a snake in its beak (fig. 12; MuM Basel 16, 1956, plate 17). The contours of the bird’s stomach aren’t shown. The wings almost appear to meet at the centre of the body, in a way that would only be possible when viewed from above. However a claw is visible – a striking detail since, in accordance with this perspective, it would be erroneously situated on the bird’s back. 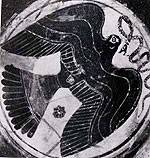 
The 6th Century B.C. brings no great innovations in the depiction of flying birds of prey when compared to the preceding century. For over 200 years the model doesn’t fundamentally change. The traditional means of representation, from which foreshortening and overlapping are largely absent, are maintained. Various ways of depicting feathers are tried out, and increasingly both of the bird’s claws are shown positioned closely together. The bilateral symmetry of the wing arrangement remains an important characteristic.

 The use of foreshortening first appears in the 5th Century B.C. The lower wing is now only partly visible, as if seen at an angle from below. The observer has to use his imagination to complete the part hidden by the bird’s body (fig. 13).


The early 6th Century sees the evolution of a bird of prey type whose wings are depicted parallel to one another, and thus layered to the observer. At most a small strip of the rear (here the right) wing’s shoulder is visible. In this case the wings also grow from the body at a right angle and curve at the wrist, so that the long wing feathers run parallel to the body (fig. 14). The birds of prey are depicted not only in flight, but also at rest or at the moment when they seize their prey.


This type first appears in Corinthian vase painting of the 6th Century B.C. An osprey holding small dolphins in its claws and beak is depicted on a Corinthian plate dating from the early 6th Century B.C. (fig. 15; MuM Basel 1979, p. 64). Its legs aren’t at an angle, as is usually the case, but rather stretched out. The wings exhibit the regular three divisions. The feather pattern of both wings is identical. In other words, no distinction is made between exterior and interior view . The middle feather zone of the wing closer to the observer overlaps with the stomach, thereby suggesting organic unity.


In the 5th Century B.C. this type increases in popularity. On coins and red-figure vases it gradually displaces old forms (cf. fig. 8). The Eagle of Zeus is frequently depicted in this way. In the second half of the 5th Century B.C. a fundamental change takes place. The wings are no longer arranged strictly parallel to one another and layered, but instead cross one another in the form of an X. The wing further from the observer’s perspective often intersects the breast contour. The tail has become smaller with a slight downward incline (fig. 16; P.R. Franke-M. Hirmer, Die griechische Münze, 1964, plate 63 no. 179). 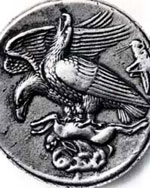 
It’s notable that in Greek art of the Classical era no fundamentally new types are developed. The canonical style of depicting birds of prey, having evolved in the Archaic period, is basically maintained.

 This formulaic style of depiction, hardly affected by other developments in art, is in large part due to the paramount importance of birds of prey as a symbol and emblem in Greek culture.  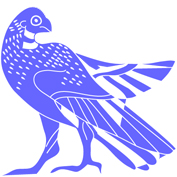