It is rare to find several, chronologically linked episodes of a story depicted in a mosaic. The doubling or even freeze-like repetition of protagonists and settings is highly unusual. All the more interesting, therefore, is a mosaic image from Chania showing two key scenes from the Amymone myth.

In 1937 in the city of Chania in west Crete a polychrome mosaic floor with figurative decoration was found. Research findings and style suggest that the mosaic dates from the second half of the 3rd Century.
The pavement originally decorated a triclinium , a dining hall of about 20 square metres that allowed room for three klinai (beds) arranged in a U-shape (fig. 1) [1].


The mosaic image faces the rear wall and so could best be seen by whoever was situated on the eastern side of the room. The exceptional composition in the main image of the pavement provided the impetus for this study.

 Description of the mosaic 

In the centre of the floor is a large area in which two scenes from the Amymone myth are depicted. The composition, featuring four figures, is surrounded by a simple plaited frame which is intersected at each of its four corners by medallions showing the head of Medusa (fig. 2. 5). The faces of the Gorgons look in various directions and have no relation to the mythical scenes depicted.


The threshhold mosaic on the west side shows two fighting cocks (fig. 3-4), leaning down towards a pomegranate that lies between them. 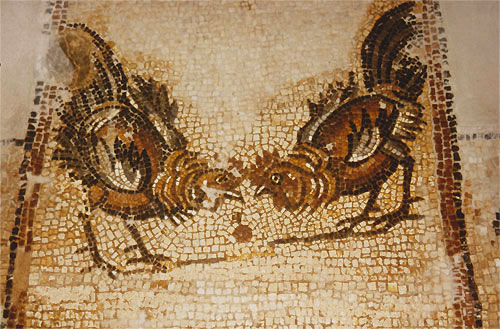 fig. 4: Drawing of the fighting cocks 


The framing geometric pattern consists of overlapping circles drawn in black lines against a white background. Within the concave square are large cross-shaped stars [2]. The klinai were presumably placed on the plain white external part of the mosaic. 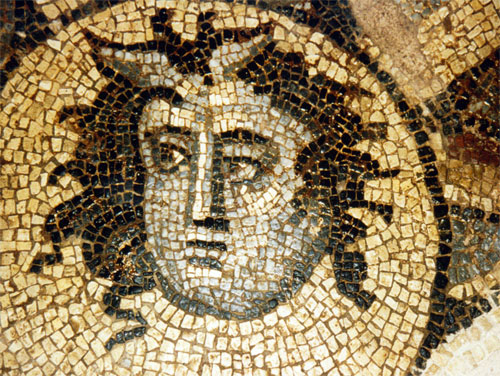 
The figure of Amymone is depicted twice in the main image. She appears in two sequential episodes : in the left half of the image she’s being harassed by a satyr. With both arms the hybrid creature has brutally seized the terrified nymph from behind. A cliff landscape is indicated in the background (fig. 6-7). 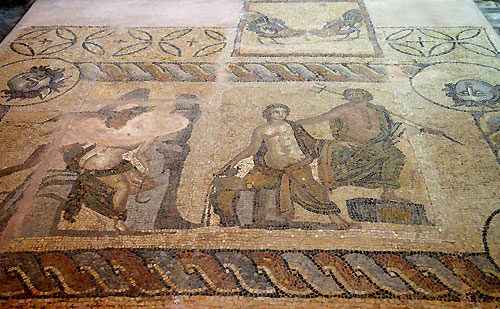 fig. 6: Mosaic floor in the museum of Chania 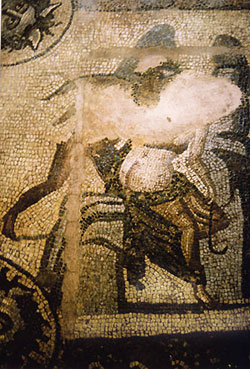 
In the image’s right half Amymone is harmoniously united with her liberator and lover Poseidon at a spring. The sea god stands in a heroic pose on a raised platform and places his right hand protectively on Amymone’s shoulder. With a lekythos the nymph scoops water from a bubbling spring.

The mosaic portrays two key scenes from the Amymone myth . Because of drought, the nymph Amymone was sent out by her father Danaos to look for a spring. While hunting a deer she woke a satyr, which then pursued her. Poseidon came to the nymph’s aid by hurling his trident at the satyr. The creature fled. With a strike of his trident Poseidon gave rise to a new spring at the River Lerna, and the spring was named after Amymone. Thus Amymone fulfilled the mission her father gave her. From the union of the sea god with Amymone a son, Nauplios, was born.

The mosaic artist concentrated on reproducing the essential elements of the myth . The tension and violence of the satyr scene stands in contrast to the idyllic aspect of the Poseidon scene. Likewise the wicked pursuer contrasts with the heroic liberator.

The two scenes are not, as is usually the case, divided by a line or ornamental band. As a result, the centre of the image remains curiously empty, without anything to catch the eye. At the same time, the artist tried to lend the composition a certain coherence by having the figures symmetrically facing two imaginary diagonal points. The empty centre is framed by the two representations of Amymone – on the left forcefully suppressed, on the right kneeling. The symmetrical structure is continued with the male figures: on the left the lecherous satyr, while on the right Poseidon stands in a heroic pose with his raised trident.

As an inferior being, the satyr is granted less space than the god. He is portrayed with his upper body bent forward and with his weight on one knee, although the cliffs in the background form a compositional counterbalance to the form of Poseidon.

That the artist from Chania wasn’t a true master of his trade is demonstrated by the somewhat inconsistent realisation of several elements and the way they are added together . Artistic weaknesses are especially evident in the areas of overlapping and foreshortening.

Several inconsistencies are particularly notable in the figure of Amymone on the right: she supports herself by means of her right knee on the upper edge of a rectangular block. Her leg is bent, the calf for the most part not visible. However, shading on the hip creates the impression that the right leg is stretched out to the left. 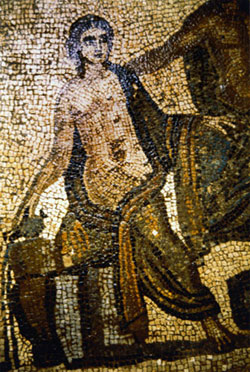 
The mosaic artist also failed to combine the buttocks and legs organically in the Amymone figure on the left. The exposed buttocks are far too wide for the narrow, rather poorly executed upper thighs (fig. 6-7).

Ambiguities are also present in the representation of the various surfaces and landscape elements. The scene on the left takes place in a ravine. The summit of a steep cliff is visible above the satyr, but it only continues down to the point where the hybrid creature is situated. The cliff top thus floats incongruously in the air.

In the set of figures on the right Poseidon stands on a higher level than Amymone. The foot of his slightly bent left leg rests on a rectangular block. However the progression of his right leg, which stretches to the rear, is hard to follow (fig. 6. 8). The cloak and thigh of the god end abruptly at the point where Amymone’s garment begins. The vertically hanging fabric effectively denotes a boundary between the nymph and sea god.

Another aspect that stands out is the insufficient corporeality of the figures, which can be traced back to the dominance of dark contour lines and the crude representation of light and shadow. Their movements appear jerky and tense.

The artist demonstrates more skill in the depiction of the two fighting cocks in the threshold mosaic. He managed to convincingly portray the birds in their combative stance. He was more successful in the decorative drawing of the bird contours and feathers than in the complex and irregular progression of the human bodies. It can’t be entirely ruled out that a different mosaic artist may have been at work here (fig. 3-4).

 Representation of the myth in a mosaic in Amphipolis 

The frequent repetition of certain themes and figures in Roman mosaics leads to the supposition that the craftsmen availed of existing models – presumably books with sample drawings .

Representations of the Amymone myth can be found throughout the empire. The mosaic images usually portray Amymone together with Poseidon. The brutal image of Amymone’s pursuit by the satyr appears only rarely [3]. 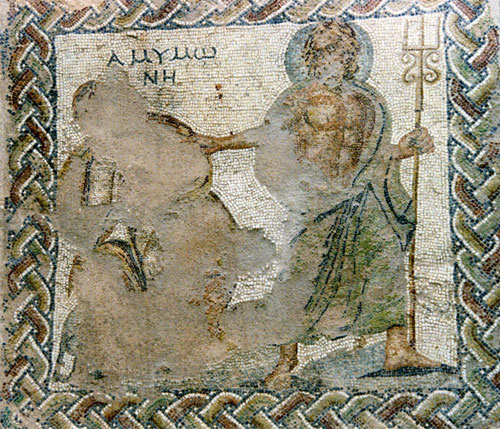 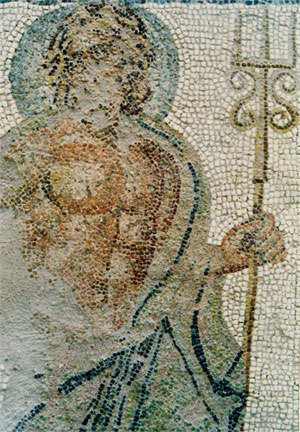 
In the northern Greek city of Amphipolis another Amymone mosaic was excavated in the early 1970s (fig. 9-10) [4]. nstead of the satyr, the kidnapping of the Greek hero Hylas by nymphs was depicted in the accompanying image (fig. 11-12) [5]. Hylas, a beautiful youth and lover of Heracles, wanted to fetch water from a spring in Cius (Propontis). The water nymphs saw him and, overwhelmed by his beauty, dragged him down to the depths. Heracles hurried to help his friend, but in vain. 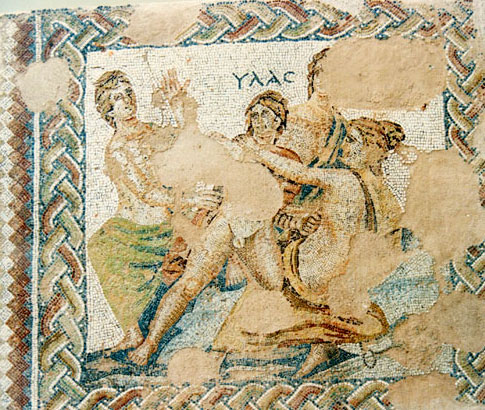 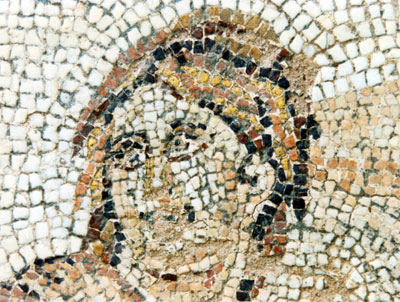 
As was the case in Chania, the rescue scene in Amphipolis (here shown on the left) was contrasted with a scene of ravishment (on the right).

Both images are linked by the close relationship of the acting figures to water. Stretching back to Hellenistic times, water as a source of life and also as a cause and symbol of fertility plays an important role in numerous floor mosaics [6].

The images of Amymone in Amphipolis and Chania are clearly both based on the same model, though whether that was a famous painting or a group of statues from the Hellenistic era can no longer be determined.

In Amphipolis the figures of Poseidon and Amymone are more clearly separated from one another. The progression of individual limbs and garment parts is therefore easier to follow. Poseidon is represented in the same standing pose as in Chania, although in this case his left foot is positioned not on a platform, but rather a shaded surface which continues under the feet of Amymone. The naked torso is particularly vivid. The breast area exhibits almost feminine curves. Of the downward flowing hip cloak only fragments remain. Several folds in gentle green tones can be recognised. Compared to the mosaic in Chania the figures have greater physicality and a stronger relationship to one another. The fact that they are also more skilfully placed within a relatively small frame could place the compositional date earlier in the first half of the 3rd Century.

In the mosaic in Chania various aspects of Greek and Roman iconography are combined.
The fighting cocks and the Amymone scenes are clear allusions to competition and courtship [7]. Medusa heads have had an apotropaic function since the Early Archaic period. In Roman times they were also regarded as harbingers of luck and so can’t be seen as mere decorative filling [8].

The representation of several sequentially linked episodes of a story is rare in mosaic composition [9]. The use of doubling or repetition is extremely unusual [10]. This makes the mosaic from Chania all the more remarkable. Parallel cases have only been found so far in mosaics in Syria and North Africa [11].

There are early forms of sequential story telling in ancient Oriental art [12]. There the scenes are combined as in a frieze. Comparable to a comic strip , whole stories are told in detail. This style of representation has few parallels in Greece. During the Archaic and Classical Periods the only examples of such sequential story telling are found in a few, individual vase images. As a rule the most important aspects of a story are combined in a self-contained image [13].

The earliest significant work showing episodes from an entire life is the Telephos Frieze which forms part of the Pergamon Altar (165-159 B.C.). The marble frieze, almost 60 metres long, depicts the myth of the ancient king and founder of Pergamon in chronological order from his birth to heroic status after his death [14].

Not until Roman times does sequential story telling gain in importance. The most significant example of this monumental art is the relief band on Trajan’s Column (completed in the year 113). Emperor Trajan’s Dacian Wars are depicted in the more than 200 metre long frieze [15]. More than 100 scenes are featured, and Trajan himself appears in no less than sixty.

Numerous examples of sequential visual story telling appear on Roman sarcophagi. The relief on the long frontal side is often divided into three sections [16].

It seems plausible that the few thus far discovered mosaics with continuous narrative were inspired by these bi- or tripartite sarcophagi compositions [17]. 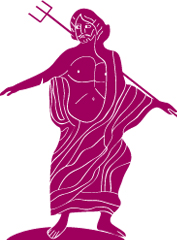