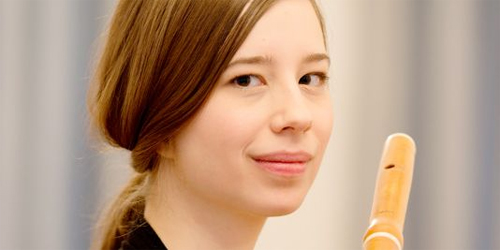 Johanna Bartz was born in Mecklenburg-Vorpommern in 1986, and in her youth already showed a fondness for historical instruments. In Berlin she first of all studied the transverse flute and instrumental pedagogy under Professor Annette von Stackelberg. Owing to her enthusiasm for baroque music she decided to do an additional course of study with the transverse flute, first under Christoph Huntgeburth at the UdK Berlin and Barthold Kuijken at the Royal Conservatory of Brussels, and then under Marc Hantai and Anne Smith at the Schola Cantorum Basiliensis (Switzerland), where she completed her Master's Degree in 2015. Johanna Bartz gives regular concerts both in Germany and abroad.

 Johanna, what's the attraction of baroque music and what particularly fascinates you about C.P.E. Bach? 
The music that we simply call "baroque" nowadays is actually a great variety of styles and musical forms that arose between roughly 1600 and 1760. The most important common element of the various styles, and the foundation of most compositions, is the use of basso continuo, or continuous bass.
C.P.E. Bach comes fairly close to the end of the "basso continuo era", and through his "sensitive style" developed his own language. On the one hand there's a connection to the musical inheritance of his father, whose expressiveness in harmony and melodic form he extends to new horizons, but at the same time he experiments with the forms and expressive possibilities of his own generation.
During his own lifetime he was, in a way, more "popular" than his father Johann Sebastian Bach, though he was also criticised by his contemporaries. While some valued his inventiveness and originality, others condemned his music as mannered and hard to comprehend.
What especially fascinates me about C.P.E. Bach is this originality, the fact that he developed a totally individual idiom. Of course it also depends on which phase of his life we're dealing with, and for what purpose he composed. The chamber music featuring the flute is often incredibly dense and very expressive. However, there's also a very late flute sonata by him, composed in 1786 for the blind musician Friedrich Ludwig Dülon, and this music has a totally different spirit, airy and light and full of playful virtuosity.

How do the tensions of "Hierarchy - courtly gallantry - enlightenment" find expression in the music of the 18th Century? 
In the 18th Century the old feudal structures still exist, although the bourgeoisie is gaining in strength all the time. The social developments occur very gradually (up to the point of the French Revolution), and we end up with cases like Friedrich II, who can be regarded as an enlightened monarch. In the field of music this process is perhaps best reflected in the fact that musical language is still strongly inspired by classical rhetoric with its system of codification, which functions along the lines of courtly gallantry: this gesture means this, that glance refers to that… However what can't be restrained is the ever-growing tendency towards a more "natural" style of composition.

What kind of relationship does your public have to baroque music? 
It really varies: sometimes I play to people who've never been to a concert in their lives before, at other times to a public of connoisseurs, and sometimes to my own colleagues. Each occasion represents a different challenge. The exciting thing is that regardless of whether people "understand" the rhetoric of the music in an intellectual sense, or have a more intuitive response to it, they are always moved – as long as the musician is capable of playing the music well enough...

What's unique about the baroque transverse flute? To what degree does it differ from the modern concert flute? 
What's special is that every tone has a different colour or shading to it, and on the whole the sound is more flexible. Compared to the modern flute, different techniques are required: naturally the playing feel is totally different due to the absence of the key mechanism, and so the way you grip it is also different. There are quite a lot of historical sources and instruction materials that have survived, and from these we can conclude that at the time other syllables were used for articulation and, as far as we can work out, the ideal sound was different.

You have a special connection to C.P.E. Bach, the son of Johann Sebastian Bach. How did you and your ensemble mark his anniversary in 2014? 
For the birthday of C. P. E. Bach we put together a beautiful musical portrait: some of his own music, including two divertimenti which were only re-discovered in the 20th Century, plus works from his musical environment, for example from his godfather G. Ph. Telemann.

 The interview was conducted by Dr. Alexandra Kankeleit. 

 Further information can be found at: 
johannabartz.com

"We must play from the soul, not like trained birds."
C.P.E. Bach